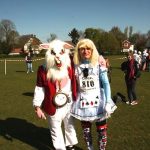 Four hundred and twenty three Easter eggs were given away at Queens Park on Sunday, one to nearly every finisher in the Easter Bunny 1K Fun Run and 5K Race which we organised.  More people entered the two runs than ever before and the large family crowd basked in the glorious sunshine and cheered on the runners/walkers/wheelchair riders/pushchairs of all shapes and sizes. Congratulations to the best-dressed bunnies and thank you to everyone who entered into the fun of dressing up. It was a great spectacle. So many people registered on the day that the Easter eggs ran out. We are  very sorry to the 22 who came in at the end of the 5k and did not get an egg and have now managed to contact all those people.

First home in the 1k, which is not a race, was, Harley Norman, who was also first in 2013, followed this year by Conrad Norman. The fastest runners in the 5k were Adam Wright in 19 minutes 42 seconds with Daniel Catt in second place and Diana Norman the first lady home in third 20 minutes 14 seconds. The last to complete the 5k had enjoyed their morning walk and ambled in after an hour or so.

One runner taking part was none other than local radio presenter Dave Roberts from Meridian FM. He carried out a series of recordings whilst running the 5k race.

Dave’s interviews can be heard here:

Our starter was the Chair of Tandridge District Council, Councillor Beverly Connolly, who also presented the prizes. The MC was Tony Nash assisted by Mike Fleet. The warm up was led by Emily Watson of Bunny Hop Dance and Fitness.

First Community Health and Care (who are responsible for the management of all the services at the The Dene Hospital) gave every finisher a collapsible drinking bottle.

A message from the organiser

Our organiser for this event, Richard York, would like to thank everyone who took part in the seventh Easter Bunny Fun Run and 5K race and he said “ I hope everyone had a good time. We also hope they raised a lot of money for their chosen charity or for our Rotary charities. We are keen to learn how much was raised by all who took part and details should be sent to rotaryruns@gmail.com quoting the amount raised and for which charity or organisation.”

Caterham Rotary is very pleased to have had the support of the following local sponsors:

Full results are available on the Rotary Runs website