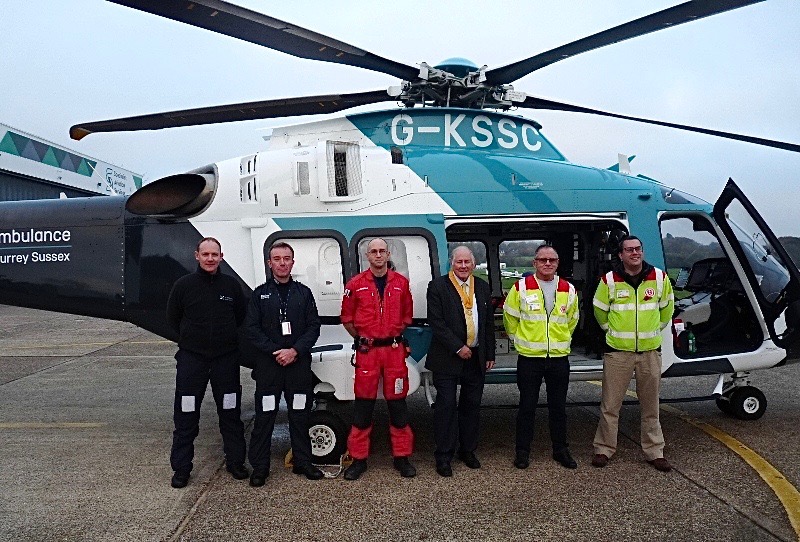 A group of members from Caterham Rotary Club recently visited the new Redhill operations Centre for the Kent Surrey and Sussex Air Ambulance. [KSSAA] They presented the charity with a cheque for £3500 which had come as a result from the Cater ham Half Marathon and 10K sponsored by North Downs Hospital in the Summer. At the same time, they also presented a cheque to SERV Surrey & South London, Blood Bikes for £500 who work closely with KSSAA 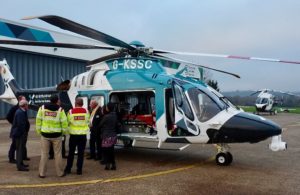 The photographs show the recently delivered brand-new state of the art Leonardo AW169 helicopter which flies further and for longer enabling the paramedics to reach, treat and deliver patients to hospital even faster.  It also has a significantly larger cabin, giving better access to patients in-flight combined with more life-saving interventions.

“The money has been raised from participant’s entry fees and the generosity of sponsors. Also essential to the event have been the volunteers and Rotarians who helped in the planning and preparation and implementation on the day. Their support was invaluable. Anyone interested in helping us next year should emailkcaterhamrotary2@gmail.com”

A record number of runners took part in the event on Sunday 22rd July. Karl Welborn won the half marathon in a time of 1 hour 13 minutes and 13 seconds with Elspeth Turner the first lady home in 1 hour 21 minutes 34 seconds.  Andrew Inglis won the 10K in a new record time of 34 minutes 59 seconds beating the previous record by an impressive 81 seconds. The first lady home in the 10k was Nicola Archer in 41 minutes 5 seconds.

In addition to our main sponsor, North Downs Hospital, Caterham Rotary would also like to thank the following organisations for their help and support leading up to the event and on the day: Redhill Aerodrome, SERV Surrey and South London Blood Bikes, Waitrose (Caterham), Caterham Photography, Bunny Hop Dance and Fitness, Morrisons, Nice Work Race Management, Raynet Communications and Dinerette Catering.

In 2019 the Half Marathon and 10k are being held on Sunday 21st July. Caterham Rotary also organize the Easter Bunny Runs (1K and 5K) which are on Sunday 14 April in 2019 in Queens Park Caterham