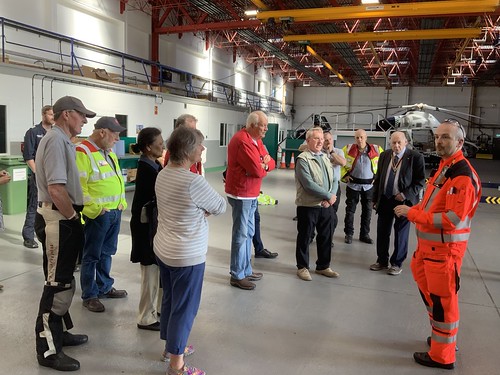 A group of members from Caterham Rotary Club recently visited the Redhill operations Centre for the Kent Surrey and Sussex Air Ambulance. [KSSAA] They presented the charity with a cheque for £3,750 which was the result of the Caterham Half Marathon and 10K sponsored by North Downs Hospital. At the same time, they also presented a cheque to SERV Surrey & South London, Blood Bikes for £750 who work closely with KSSAA.

The money was raised from participant’s entry fees and the generosity of sponsors. Also essential to the event have been the volunteers and Rotarians who helped in the planning, preparation and implementation on the day. Their support was invaluable. Anyone interested in helping us next year should email caterhamrotary2@gmail.com.

A record number of runners took part in the event on Sunday 21st July. James Connor won the half marathon in a new course record time of 1 hour 9 minutes and 55 seconds with Kat Owens the first lady home in 1 hour 29 minutes 35 seconds.  John Herbert won the 10K also in a new record time of 33 minutes 11 seconds. The first lady home in the 10k was Nicola Archer in 41 minutes 40 seconds who was also first in 2018.

In addition to our main sponsor, North Downs Hospital, we would also like to thank the following organisations for their help and support leading up to the event and on the day:  Carnvale Heating, Redhill Aerodrome, SERV Surrey and South London Blood Bikes, Waitrose (Caterham), Caterham Photography, Whoop! Wellbeing and Fitness, Tesco, Morrisons, Nice Work Race Management, Raynet Communications, Sunnydown School and RiDE.

In 2020 the Half Marathon and 10k are being held on Sunday 19th July. Caterham Rotary also organise the Easter Bunny Runs (1K and 5K) which are on Sunday 5th April in 2020 in Queens Park Caterham.