Update on one of our International links 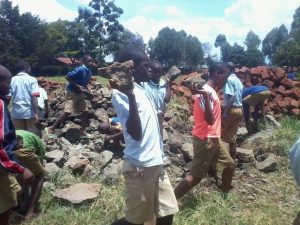 Students actively helping the building of the new school library

“Kimilili Boys’ Primary School in Kimilili will soon have a library thanks to the support of the community of Caterham and District.

presence of books and even a computer or two as the villagers, teachers and

Caterham and supporters of CHECK (Community Health and Education for the

constructing the much needed facility at the school. There is a great buzz of

excitement as the 1000 boys and their teachers, parents and local workmen pitch

in with the work.

Now, books are needed and CHECK hope to be able to pay for the cost of half the

half of the costs. The philosophy of helping others to help themselves is

strongly adhered to by CHECK and the Kimilili Schools and hospital.

an International Award partly as a result of this pen pal project. Funds have

the group who went out to Kimilili in 2013. A further much needed two chairs